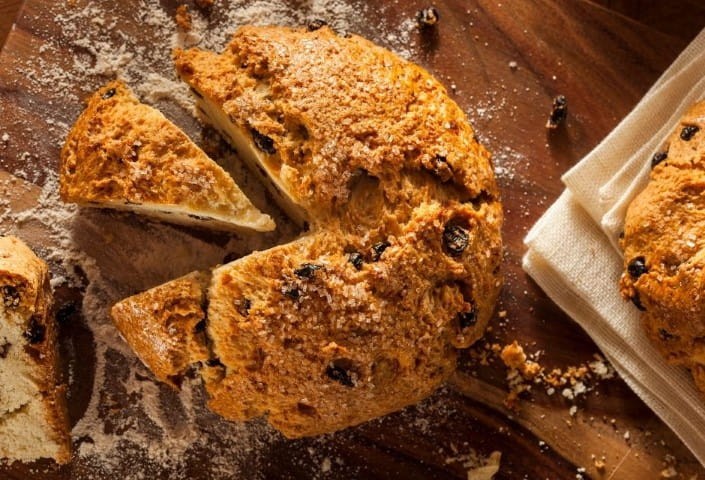 This Irish Soda Bread is a traditional recipe to make for your St. Patrick’s Day celebration!

If you are looking for a delicious and warm way to celebrate St. Patrick’s Day, look no further than this traditional Irish Soda Bread recipe. This bread is easy to make and can be enjoyed for breakfast, as a snack with tea, or for dessert.

The dough comes together quickly making two loaves so you will have some leftovers to enjoy. Raisins add a little sweetness as does the sugar and cinnamon on top. Slice while warm and give it a good lather of Irish butter for a warm treat anytime.

Salute St. Patrick’s Day with this traditional Irish Soda Bread on your table during the festivities!

What Are Some Irish Family Traditions?

One of the many things that make Irish culture so special is the family traditions that are passed down from generation to generation. From celebrating St. Patrick’s Day each year to telling stories around the fire, these traditions bring families together and create lasting memories.

Here are a few examples of some popular Irish family traditions:

–St. Patrick’s Day: This is without a doubt the most well-known Irish tradition. Every year on March 17th, people all over the world celebrate everything Irish. Parades, food, and drinks are just a few of the things that make up this festive celebration.

– Storytelling: Telling stories around the fire is an age-old tradition in Ireland. These stories often have a moral or teach a lesson, and they are passed down from generation to generation.

-Music: From traditional Irish folk music to modern pop songs, music is an important part of Irish culture. Families gather around the piano or guitar for hours on end, singing and playing their favorite tunes.

– Feasting: One of the best parts of Irish culture (and my favorite) is the food. From hearty stews to delicious desserts, there is something for everyone to enjoy. Families often come together to feast on their favorite dishes, and there is always plenty of leftovers for later!

According to The Society for the Preservation of Irish Soda Bread (yeah, it’s THAT serious), it wasn’t actually invented in Ireland!

Their history regarding Irish Soda Bread states “Just like the bagpipes weren’t invented by the Scots, the chemical reaction that makes Soda Bread what it is, wasn’t invented by the Irish.  The earliest reference to using soda ash in baking bread seems to be credited to American Indians using it to leaven their bread. Pearl Ash was used prior to 1800 to make flat cakes on hot rocks by combining it with an acidic ingredient in the dough.  However, as the Scots have made the bagpipe their instrument, the Irish have made Soda Bread theirs.”

Interestingly, the Irish did not adopt this way of making bread by choice as much as by necessity due to poverty across Ireland in the 1830s. Soda bread was the easiest and least expensive way to put bread on the table.

The combination of soda and Irish “soft” wheat flour creates a quick and inexpensive way to produce a quick bread. And this became very popular in Ireland.

Can You Make Traditional Irish Soda Bread Without Buttermilk?

Traditionally, sour milk was used in the making of soda bread in Ireland which in the 1930s could be easily purchased from the local creamery.

As you know, today buttermilk is used instead of sour milk since it is more easily found.

However, if you wish to use sour milk, you can actually make your own instead of waiting for it to go sour. Simply combine a cup of fresh milk (low fat or whole) with 1 tablespoon of lemon juice or distilled white vinegar.  In about 15 minutes you will have a substitute for buttermilk.

My Mamaw came from a long line of the O’Dwyer lineage in Ireland and she had the copper top hair to prove it.

She made her traditional Irish Soda Bread with sour milk. Mamaw also added cinnamon for a little spice and passed the recipe on to me. My grandmother delighted us with her Irish Soda Bread and many other treats just about every time she visited. The excitement in the kitchen was electric when that delicious bread came out of the oven! Smiles filled the space.

When I was older, my Mom taught me how to make Mamaw’s recipe, but I still don’t think it is as good as hers. Grandmothers add warm hugs and love to their baking that just cannot be replicated no matter how much you try. 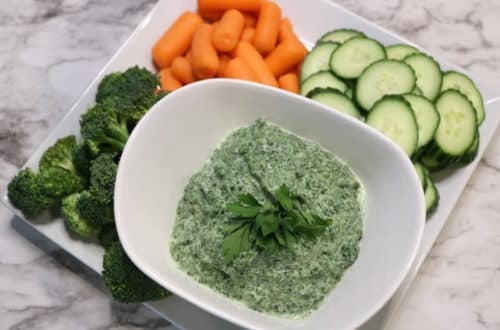 No-Cook Appetizers Keep Heat Out of the Kitchen